Learning to be Literate

- Nomita (Curriculum Support & Facilitator)
7-year old Samanya lives in the middle of a field under a tarpaulin sheet, insignificantly tucked away from all the urban action. Samanya’s mother is a scavenger. Three months ago, Samanya wandered into our learning centre, not far away from her little home. Her hair was uncombed and matted, framing her beautiful face that quickly broke into a smile! The sparkling black eyes, the dangling earrings and nose-pin added to her charm. She invited herself into the classroom and sat down, her thick silver anklets tinkling musically. Thus began Gubbachi’s engagement with Samanya! (You came across her in this post by Deyone) 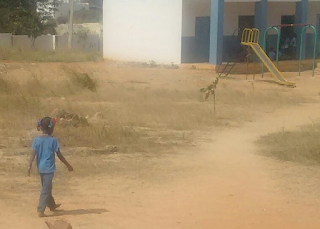 Every morning, Samanya is here an hour before all other children and is often playing on the slide when we arrive. She quickly runs to help us, singing as she opens windows, straightens slates, chalk and paper. Samanya sings her own songs, often weaving the Circle-time song learnt at Gubbachi, with other songs. The languages are mixed too - Kannada with Tamil (her own language). She has a beautiful voice and her singing brings a calm to the beginning of the day. She settles down around the children’s books or sometimes writes on the board or the painted wall surfaces until the other children arrive.
Days pass, she moves on in the program, first through the early learning centre activities, building her social skills, learning to communicate in the languages of the other children, developing her fine motor skills, pre-numeracy and pre-literacy concepts. Her morning writing moves from squiggles, to scribbles, to more defined shapes that resemble inverted 2s, 5s, 7s, other numerals and Akshara-like shapes. She is beginning to recognise the symbols of print in her environment and imitate them – both numbers and letters.
One morning she walks up to me and produces a jewellery catalogue! She asks me to read it. I look at the page in front and point to the necklace in the picture, “Isn’t this necklace pretty?!” She frowns at me, and points to the text on the page and demands “Read this!” So I began reading, “The price of gold as determined by …”. Her face lights up! She was happy and satisfied. She snatched the catalogue back and sat down to read it.
Could it be that I just confirmed to her what she suspected, that the text had a relationship to the spoken? And … that the written word could be read and … had some meaning! This is an important learning that emergent literacy talks about. Making symbol (text) to sound connections, and connecting to meaning. Her engagement with text continues. She gets books to the centre that her mother scavenges. Next was a note book of some hapless engineering student. The graphs she amusingly reads as “haavu” (snake) for a sine curve. Another graph is “aane” (elephant), and so on! The circuit diagrams are “bus” to her! She now demonstrates that pictures and text both hold meaning. Samanya has begun reading!
A few weeks later Samanya begins writing her name in Kannada and English. That’s where she struggles! Her fine motor skills are yet developing. What helps her grip is writing with chalk on board and with coloured crayon on paper. She writes but the letters are inverted. She struggles to move her hand back to form the curve for the ‘S’. What she does, interestingly enough, is to accommodate this challenge using a lying down ‘S’ like a sine curve. To correct her orientation, we try various techniques like tracing the letters on the floor and placing stones in the direction of writing. Next she runs her index finger on sand letters before attempting to write. She still makes errors. Demonstrating to her while verbalising how the shape is formed seems to help her best. I show and tell her how I am writing the letter. Saying, “I’m now moving my hand back to make the last curve of ‘S’.” This helps her. The very next stroke she attempts is right! She sports a wide grin! All she needs now is repeated practise to master the letter.
Typically, we’d expect a 7-year old to do this quite easily. However, while Samanya has a rich repertoire of oral songs and stories, and ingenious, independent methods to further her own learning, she has never before written on paper. While listening, speaking and learning are innate; reading and writing needs to be taught. Pre-schools spend months and years readying children for reading and writing. Here, time is not a luxury - bridging learning gaps for getting children ready for mainstream schooling to an age appropriate level means only one thing. Trying to do the most in the least time.


Policy decides that 6 months of bridging is optimum. How practical is it to look at the bridge program as a ‘crash course’ when accumulated deficiencies are to be ‘bridged’? When many lost years are to be made up in 6 months? Something that needs thought at the policy level.
Posted by Unknown at 07:02 17 comments:

One Size Doesn't Fit All

- Mani (Early Child Care & Curriculum Support)
There have been many times when I have walked into a public toilet in a railway station or a bus stand and walked out unable to use it. I have always wondered why people defecated all over the floor instead of inside the toilet bowl. Now I know why this happens.
At Gubbachi, once we had our water in place, and the toilets were actually fully functional, we thought things will be easy. A few mornings later the Akka’s, helping with the little ones, went to clean the toilets before the children were to use it. We did not see them for close to an hour. When they did show up later we were told they were delayed because there was shit all over the toilet floor. 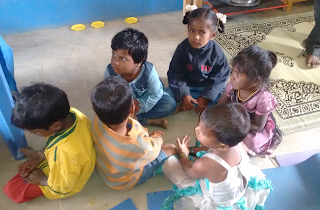 As we got to the ‘bottom’ of it we realized that the little ones (3 to 6 year olds) were terrified to use the toilet. They feared they would fall into the bowl. The regular sized Indian toilet bowl was too large for them. Usually the Akka’s cajoled them into using the bowl, ensuring they will hold them and that they would not fall. This was not a foolproof method as the ‘urgent’ ones could not hold till they were suitably convinced that the hole would not swallow them up.
Also one Akka and 4-5 children meant she could not be there for every child. In the absence of the Akka’s the children generally used the floor in the toilet to finish their ‘jobs’. This means that everytime a child wants to use the toilet they had to be accompanied by Akka. On days Akka is absent or otherwise occupied, the child does not think twice about running behind the bushes and answering natures call.
When we are talking about Souchalayas for all, are we thinking about the user?...our little ones for example J
Posted by Unknown at 07:54 5 comments:

A bit about us

We are a community of learners who have come together to bridge migrant Out of School Children back into the public education system. A program which endeavours to make learning meaningful for the child and strives to improve the life chances of the child ...and, potentially, her family!