- Team Gubbachi
Both our programs in education are human intense programs - humane intense, I would say. We have stepped into an area that has to do with making up for socio-economic deficits, psycho-emotional deficits, not to mention formal learning deficit. We know this work needs doggedness but more than anything else it needs sheer human hours. There is Teaching Learning Material to be made (literally churned out), there are one-to-one classes required to assist children cross-over learning humps, to execute classes for English language learning as a foreign language, rethinking learning/teaching for older non-state literate children, and such. I know every single idea needs elaboration. That’s for another day. This post is about the force, which make things happen for us, our volunteers. 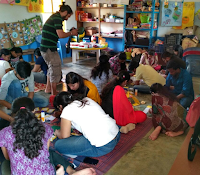 When we conceptualised Gubbachi, early in 2015, we were very certain that core classroom processes couldn’t be volunteer driven. But, little had we anticipated that there are equal number of engagements for which we can’t begin to employ people - engagements that make up for parental absences, inabilities, helplessness; societal responsibilities like nutrition, health and well being; systemic responsibilities like equal opportunities to be able to access education. These are volunteer roles, which require a high degree of empathy for the children, trust in the program, sheer perseverance to not get distracted by personal daily routines and engagements.
If I may say, we “recruit” volunteers. It is important for us that while they step in to help us with the children, we ensure that the activity helps them to reach within, give them peace, give them an opportunity to step into a role that they haven’t explored before, an insight into the other world. We have learnt to engage with the “person” who is the volunteer and we are learning how to make the experience more meaningful for them and, at the same time, help us nurture our program.  It is an on-going journey with new experiences; and one that helps us all grow.
A big thanks to every one of our amazing volunteers!
P.S. We are looking forward to writing a series of posts on volunteers and volunteering as we prepare for our Volunteers’ Day at Gubbachi. 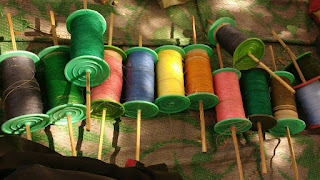 All of us at Gubbachi love celebrations. We did not realize it till we started having zesty, joyous celebrations. It all started casually with, “what are we doing this Diwali?”. Just some sweets and formal/fancy clothes is definitely not what we wanted. We painted diyas with the children, talked about Diwali, it’s cultural and religious significance and how it is celebrated in different parts of the country. We identified sameness in the celebrations and reasons for the differences. Along with the children, team Gubbachi learnt something more about each other. We were thrilled. We were also thrilled that a regular conversation with Anand Sweets converted them to pledging sweets for all our children in the bridge centre and the two Government Schools. We loved the way people from unlikely quarters came together to light up the lives of our children.
We have written about our Children’s Day in an earlier post. We are absolutely proud of our team and our volunteers’ team, which ensured a fantastic Children’s Day for all of us. The joy on children’s faces far exceeded our expectations. We were overwhelmed by the support from the donors. That is when we were convinced that celebrations at Gubbachi would always be an open event - an event with the larger community.
This got further strengthened when the team suggested we celebrate Christmas. This time with a Christmas tree and gifts for every one of our children. We again put out our intentions. Neighbours and neighbours of former neighbours pitched in for Christmas trees for the two centers/schools and goodies. Teachers brainstormed eco-friendly Christmas decorations. Young teenagers decided to spend a night baking 141 cupcakes. As she did for Children’s day, Marzia pitched in again along with her friends. The children visited St. Anthony’s Church next door to see the Nativity Scene and Christmas decorations. Teachers spoke about Christmas and ensured that children shared their thoughts and experiences of Christmas. Our neighbourhood carol singers taught us carols in Kannada and English. John and Bindu responded to our call for donation for books as Christmas gifts for our children. We diligently chose the titles that were reading-level appropriate and every child in a group got a unique book. Pratham generously gave us discounts ensuring that all children got a book. Since our government school children had gone off on their Christmas vacations we deferred book distribution to Sankranthi. 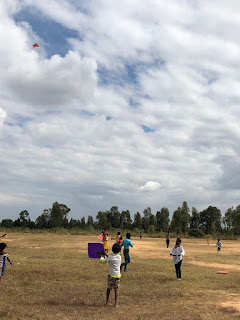 With the start of the New Year we started working towards Sankranthi celebrations. All the adults learnt a little bit more about how we individually celebrate Sankranthi . We rejoiced at our sameness and differences. We heard about Sankranthi stories or lack of them from our children at circle time. We shared the cultural significance of Sankranthi in India. The children learnt harvest songs and dances, and drew about Sankranthi celebrations. We ear-marked Jan 12th for the big celebration. We applied cow-dung paste in readiness for rangoli, the neighbourhood cow was generously decorated, earthern pots were painted and given a festive look, an open wood fire was built for boiling-over the milk and making Pongal and children flew kites. We called it a day with boiled sweet potatoes, peanuts and avarekai bean pods, revadi and elu bella. Again, this was planned and anchored by members of the team – each taking charge of different aspects, yet seamlessly working together to make it joyful.
Learning and celebrating and celebrating for learning are an integral part of our days!
These are the events and moments when Gubbachi’s culture within the team gets strengthened. These are also occasions to know each other at a deeper level.
Posted by Unknown at 00:36 No comments:

- Rizwan (Community & Operations)
As part of our work, we went around Kodathi looking for children - from migrant families, who were not going to school. Since we had covered most ‘out-of-school’ children in Kodathi, where we had started our first project, and had brought them back to school; we went beyond Kodathi- to cover adjacent areas. We were quite pleased with ourselves on not to finding many children around. This meant that there were no ‘out-of-school’ children in the area.
Suddenly, one day my bubble burst! I was compelled to take my fellow Gubbis (colleagues), to a place near-by. All were shocked and asked me, “how did you find so many?” I invited the Cluster Resource Person (CRP) of the area to come, he immediately called up the Block Resource Coordinator (BRC). To our surprise, the BRC turned up the very next day. She too was shocked and asked the same question, “how did you find them?”
So here goes the story… ...
As we (our community facilitator and I) survey the area around Kodathi, we literally go into nooks and corners looking for children. One such day, as we drove through Carmelaram Railway Station Road, we met an old acquaintance. As we stood speaking to him, we saw a lady walking by with an 8 or 9 year old girl. By their looks, we guessed they were from the North Karnataka region, hence ran and stopped the lady to enquire about the girl. Our acquaintance got a little worried about what we were doing.
With our experience of the last two years, we have learnt how to start a conversation safely with a migrant family.  We confidently approached the lady, enquired about them and asked why the girl had not gone to school. We were right in guessing, as they confirmed, that they were from Raichur district and were here as construction workers in a brick factory nearby. She mentioned that the girl did not go to school, and they were going to the hospital as the girl was not keeping well.  Then, she gave us the rough location of the construction site when we asked to confirm, if there were more ‘out-of school’ children on-site. 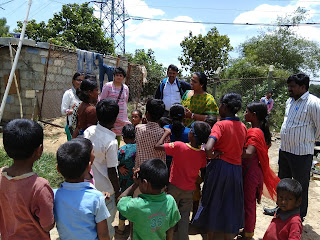 We immediately decided to visit the site, which was difficult to find, at first, as the brick factory was inside a large compound. After driving around for a while, we spotted a big cement mixer and taking a chance, we headed towards the gate; only to be stopped by the security person. He was initially reluctant, but when we explained that we were from a school nearby and wanted the children to get education, he responded. He called his supervisor on the phone, and asked us to speak to him. On conveying our intentions, he was ordered to let us in.
It was a huge place with a lot of commercial activity, but no visibility of a labour settlement. In front, was the huge cement concrete mixer, then the lorry garage, followed by a welding workshop, brick kiln; and then, finally, we could see the labour settlement. As we started to walk towards it we were shocked to see 30-40 children playing around…and not going to any school!
And so, from this one settlement, we found Gouri, Parshu, Raj, Vijay, … … and all the other 40+ children; and have brought them back to the school.


Footnote: As they find and discover themselves; our search for more little gubbis (sparrows) continues; and the list goes on ...
(* names changed)
Posted by Unknown at 13:10 No comments:

As with everybody else, I guess, a lot of our conversations at Gubbachi happen over WhatsApp group: “Gubbi ki Uddan”. We often exchange messages of the sort: “we must do the zoo with our bachaas", this looks interesting. Should we take the older bachaas”, “what's your thought on the thematic learning experience for the young ones”... … .. Once in a while we also have to clarify that we were talking about our biological children.
Just yesterday, I was on my way to the centre. In a hurry to reach my class with Vijay and to meet a visitor. A supporter for our Christmas celebrations called, and she wanted to know when she could talk to me about the details of cupcake delivery. I quickly replied that I need to teach my bacha and will call her back. “So are you not coming to the centre? Your children have exams?”, was her puzzled response.  This left me confused for a second; and then quickly I realised the limitation of my language.
She assumed I was talking about my children.
Our work necessitates that we parent our children at Gubbachi. The sheer human effort that goes into nurturing a child is a necessity. Not just to provide for the child (which is often not possible by their caregivers) but also to envision a possible future. Possibly, even a near term future of just surviving. When a co-founder was worried about the survival of our pre-schooler, Raj, we had to step in with a series of health interventions for him. If seven of our older Telugu literate children need us to reconceptualize education for them, we just have to. It is no different from parenting. We just need to do what we need to do.


We have aspirations as parents: biological or otherwise and we have a universe conspiring along with us!

And, we are hopeful parents in the new year!

Wishing all a very happy and satisfying year ahead!
Posted by Unknown at 12:22 6 comments:

A bit about us

We are a community of learners who have come together to bridge migrant Out of School Children back into the public education system. A program which endeavours to make learning meaningful for the child and strives to improve the life chances of the child ...and, potentially, her family!